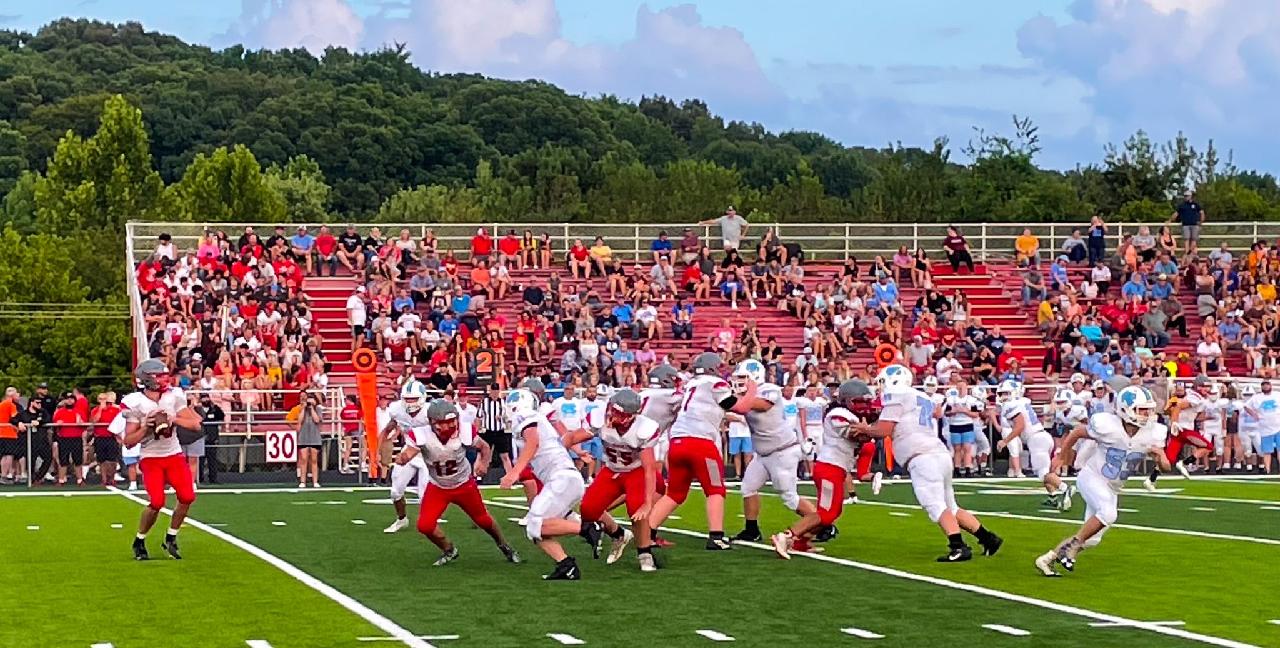 The heat was up and the sun was out Friday afternoon at Loudon High School as the summer tried to hold on, but there was no doubt that fall was in the air. The stands were full as a collection of teams from around southeast Tennessee gathered together to take part in one of the best parts of the football season. To those watching, the jamboree consists of multiple teams taking turns squaring off for a quarter of football. From the viewpoint of the players and coaches however it is much more. The jamboree signifies that football season is finally really here.

Copper Basin and McMinn Central took the field for the third quarter of the evening. This was a rematch that both sides have looked forward to since the heated bout that took place last fall down the mountain in Englewood and it showed. Central had the ball first and from the start showed a much different approach to moving the rock down the field than they did the last couple of years. Central’s offense was very dynamic and the play calling was diverse, which is very different from the run heavy stylings seen over the last few years. The new head coach, Matt Moody, brings with him a more aggressive and varied playbook and it seems to pair very well with the athletes at Central.

Though Central came out firing they struggled to hold back the experienced defensive front of Copper Basin. The Cougars were able to keep pressure on Central’s quarterback and running back which made the Chargers stretch plays laterally much more than desired. Basin’s run defense played strong on the day and looks as if it will carry over its ability to dominate the line of scrimmage from last year. Where the Cougars struggled on defense however were the edges. Central was able to find most of its yardage in the flats and on the sidelines with runs that were pushed out to the sideline. This can be attributed in part to having a young secondary and still developing certain positions. This can be expected to be strengthened though as the year continues and these players get some more game time experience.

Copper Basin’s offense looked very sharp from the start. The offensive line did a great job of fitting up on runs and keeping a pocket on passes. The run game looked great as well. The Cougars are returning a strong core unit on the scoring side of the line and have multiple options of who to go to. The receiving corps looked good on the evening. They were able to run crisp routes and get some separation to open up to some down-field darts. The run game looked great as well. With one of the most under-recognized running backs in the area, Basin was able to get some major yards on the ground.

Central’s defense was no push-over though. The Chargers showed that they are not scared to make something happen. The play calls consisted of multiple blitz that were able to put pressure on the quarterback or disrupt a run. The defense played strong and covered deep passes well but did leave some holes open underneath. They will be hard to beat deep and will force teams to go for the small gains.

Key players for McMinn Central this season are going to be Novice Cox, Jarel Arnwine, and Darius Cardin. Cox is very athletic and made solid decisions with the ball. He was forced out of the pocket on multiple occasions and did very well adjusting on the run. He also did not seem to be bothered by this and was able to keep his composure. His arm looked strong and accurate, connecting with Cardin for both of the touchdowns. Arnwine is going to keep defenses worried about the ground game and is quick with good vision of the field. He had a few big carries on the day and really showed that he is capable of covering a lot of ground. Once his line is able to make some lanes he will have some huge runs. While Arnwine is keeping defenses focused about the run, Cardin is going to be lighting up the scoreboard deep. He is a tall, athletic receiver with good hands and an ability to get separation. He will make many teams pay dearly if they do not body him up and force the ball elsewhere.

Copper Basin will be looking for multiple receivers to get some big yardage and to be viable threats with junior Cadan Williams, senior Jonathan Johnson, and freshman Cade Dean being among those top choices. These guys should put up some great yardage this season and really cause defenses headaches. Senior Sebastian Balliles will be the most dangerous threat for the Cougars this season, though. Balliles is an absolute rocket out of the backfield and is by no means scared of contact. His ability to get yards after contact allows him to really cause some damage. Also look for the defensive line to cause issues with offenses all season. Junior Addison Hook and senior Krus Soto are at the ends and put in work flushing out Cox and pushing runs to the sidelines while seniors Kade Foster and Brock Whitaker set up shop in the middle and made the offensive line earn their keep. It should be an exciting season for these four.

McMinn Central came out on top 14-7 at the end of the exhibition but overall both teams looked exceptionally well. Basin has had to adjust to young players or players with little experience filling big roles and Central is revamping their entire system under a new head coach. They have both done well with these changes though and look to be ready for exciting seasons! Make plans to be at Copper Basin High School to watch your Copper Basin Cougars take on county rival Polk County High School to open the season officially this coming friday, August 20th. Basin is up 2-0 since the rivalry has been renewed and the Wildcats will be looking to change that.